Preservation of food by means of heat (thermal processing) is a technology, which has been used for centuries and has become the standard treatment to reduce pathogens in perishable foods. Records state that, “the shelf-life of wine was elongated with heat since the 12th century in China.”

Sterilization, also known as Apperisation is a treatment suitable for all perishable foods. Re discovered by Nicolas Appert in the 18th century as a treatment for the preservation of perishable foods in glass jars. By placing the jars in boiling water the harmful pathogens are denatured, prolonging self-life significantly.

Sterilization targets spores, to prevent re-growth in liquid media with a 12 Log reduction. A typical time-temperature for liquid products such as milk is a thermal treatment of 15 min at 121° C. Sterilization treatment alters the nature of food completely, giving it a cooked characteristic 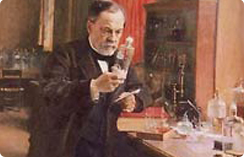 The thermal process Pasteurization discovered by the chemist Louis Pasteur in 1862 is a milder treatment suitable for all perishable foods. A typical time-temperature treatment for liquid products is 2 min at 72° C, A 5 Log reduction for liquid media.

Louis Pasteur’s research on the fermentation process for wine growers in France let him to discover: That the nature of fermentation is caused by the growth of microorganisms. Pasteur demonstrated: The growth of bacteria in nutrient broths is due to biogenisis rather then a spontaneous generation. Together with Claude Bernard, Pasteur developed the pasteurization treatment, reducing the number of pathogens without radically altering food characteristics.